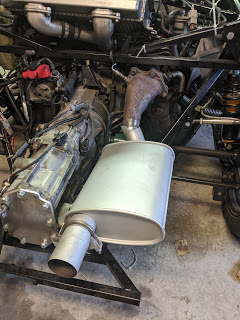 Engine I mocked up the exhaust using my existing Boig Motorsports exhaust and a portion of the downpipe from the EJ207. It won’t be as nice as the original Boig exhaust but it’ll do and it didn’t cost me anything extra. A short drive with the exhaust confirmed that all my low-speed engine issues were […] 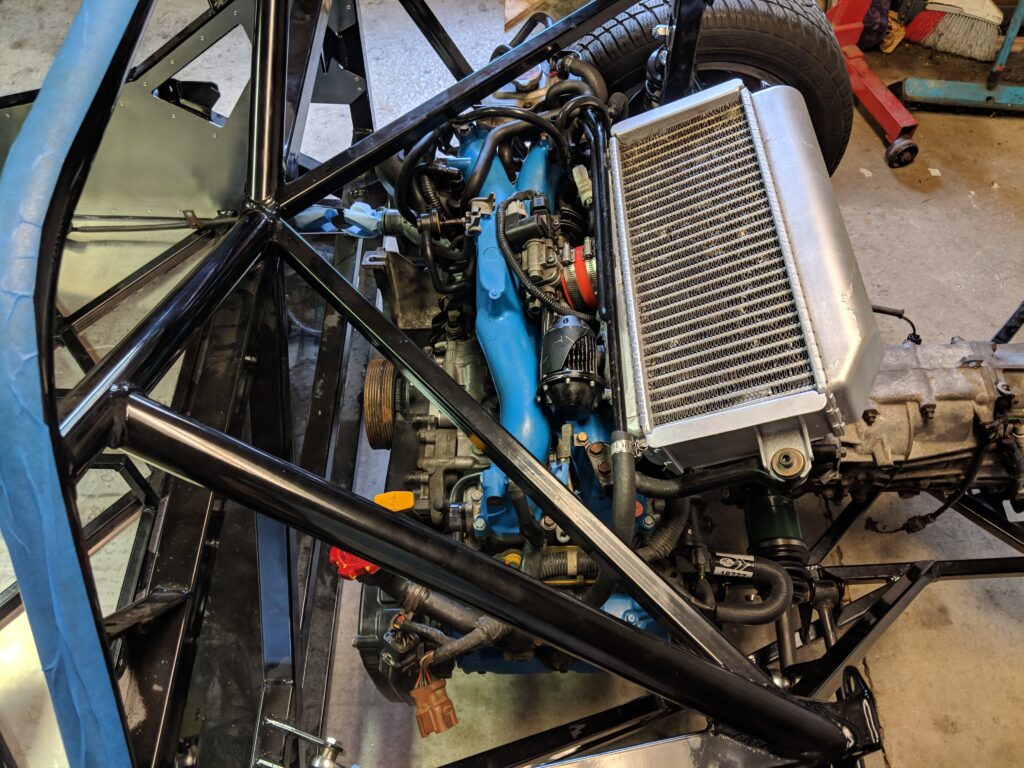 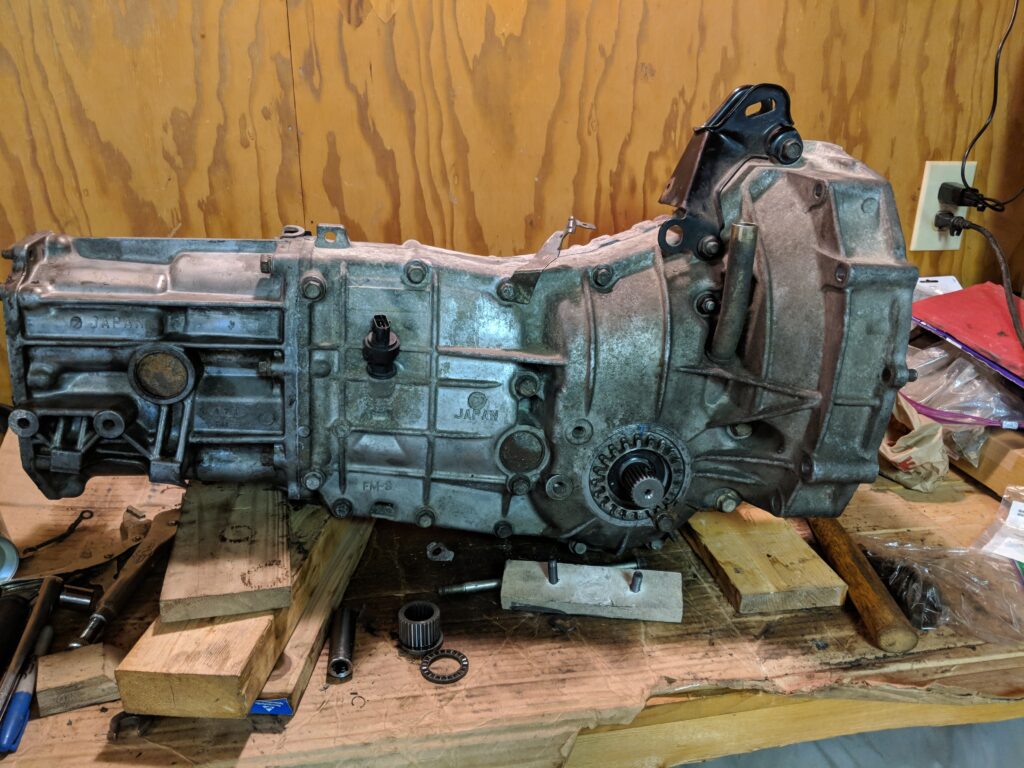 Transmission: So the transmission news unfortunately did not get any better in the last week. I went to pickup a used 2004 WRX transmission for $300 from a guy about an hour away. I brought the transmission back and immediately started to disassemble it so I could install the diff and check out the condition […] 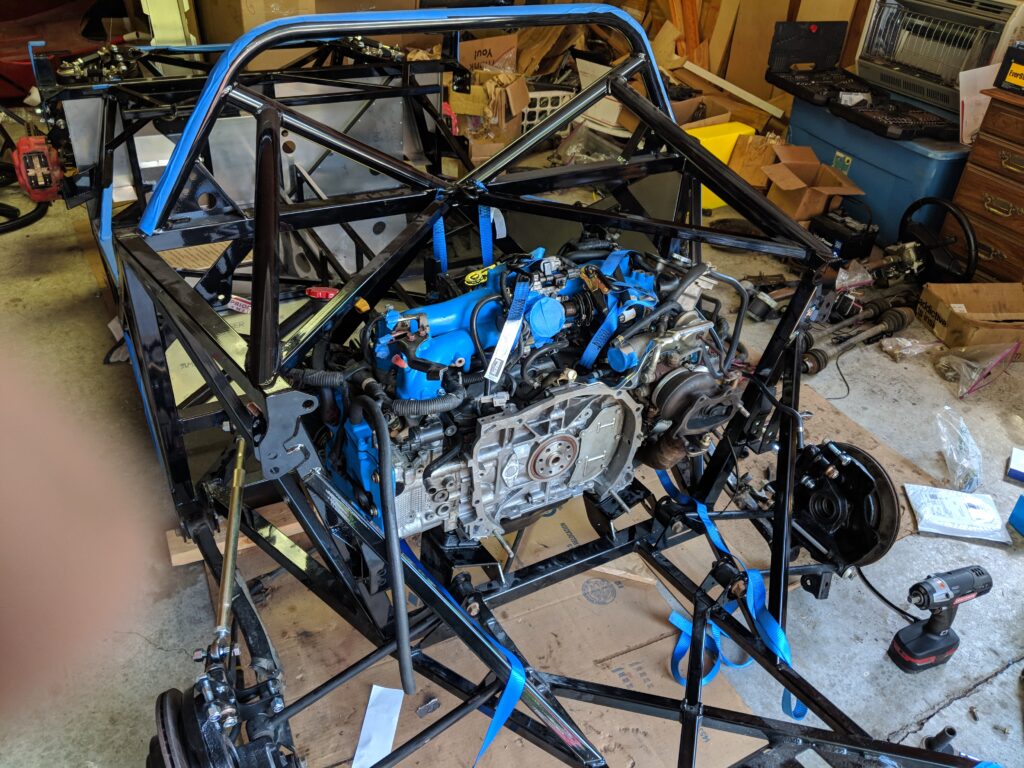 Engine: Installed engine mounts Connected a couple more vacuum/coolant lines. Still 2 or 3 more to finish like the boost control solenoid. Alternator partially installed, but I seem to have left the power steering bracket that’s used to tension it in Michigan…hopefully will resolve that soon. Installed the engine into the chassis! I probably could’ve […] 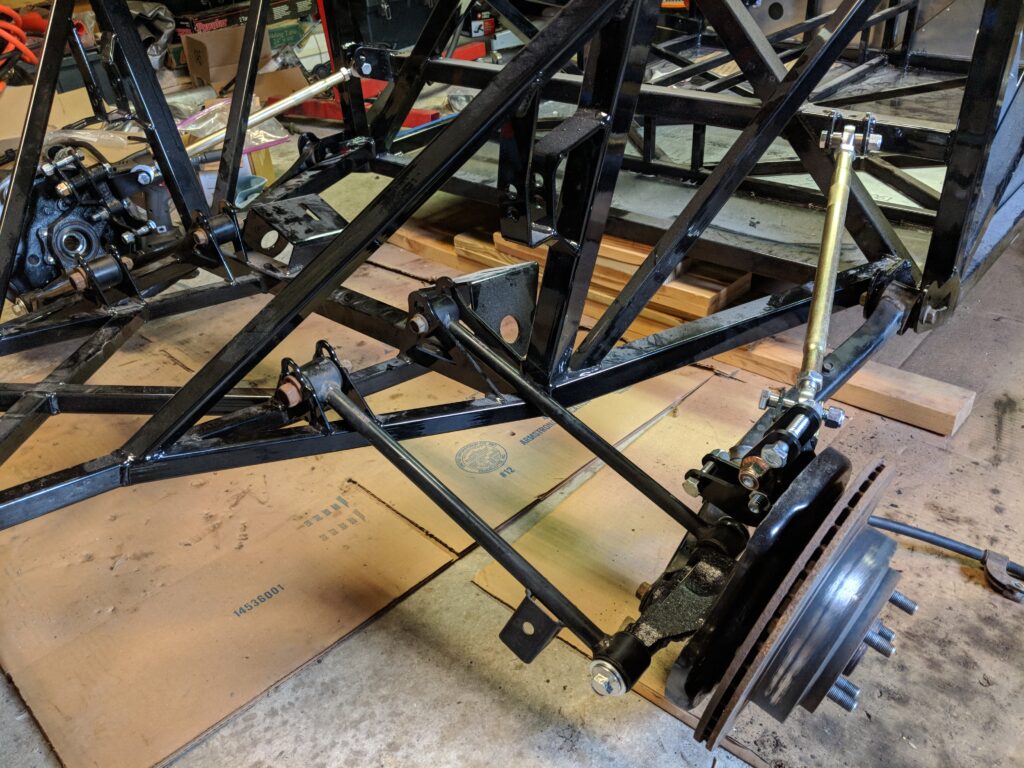 Rear Suspension: Prepped and painted the rear brake mounting plates. I removed the rusty dust shields from them which seems to be a common thing to do when they rust out. I installed the rear wheel bearings, e-brake assembly, and hubs. This went pretty smoothly as the process was similar to the front wheel bearings. […] 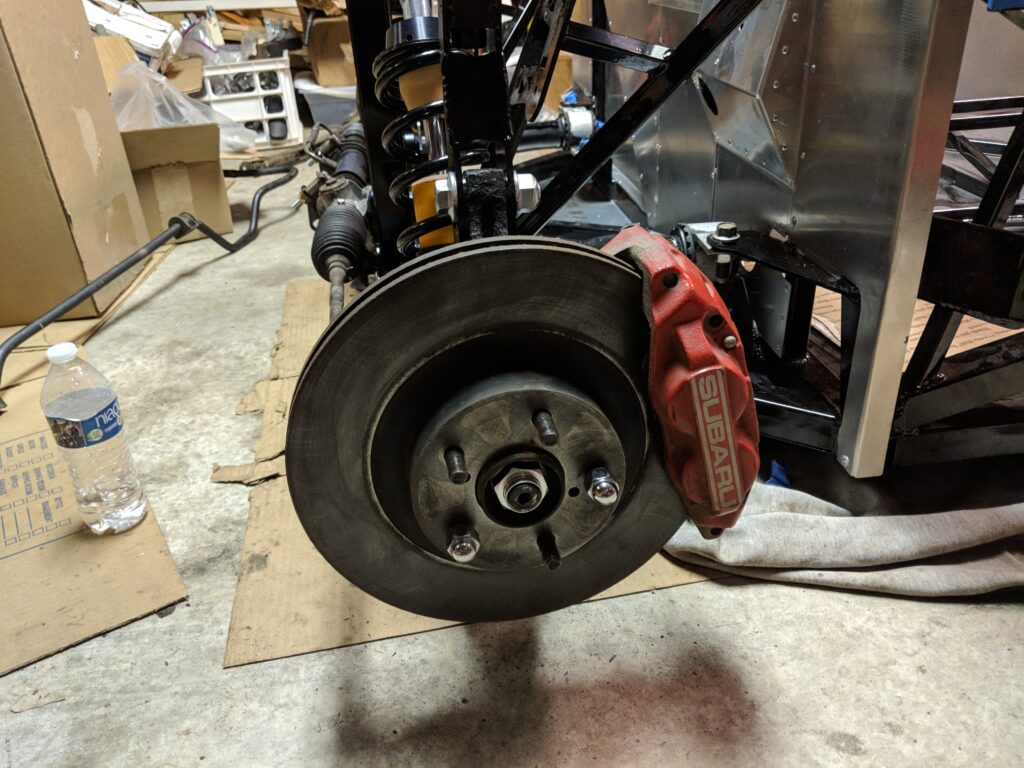 Front brakes: Cleaned up existing brake discs for semi-temporary usage. I’ll replace them down the road but they’re fine until the kit is fully finished. The pads are even in good condition with lots of material. Mounted the 4 piston front calipers. Front suspension Issues: The replacement ball joint I bought was poor quality and […] 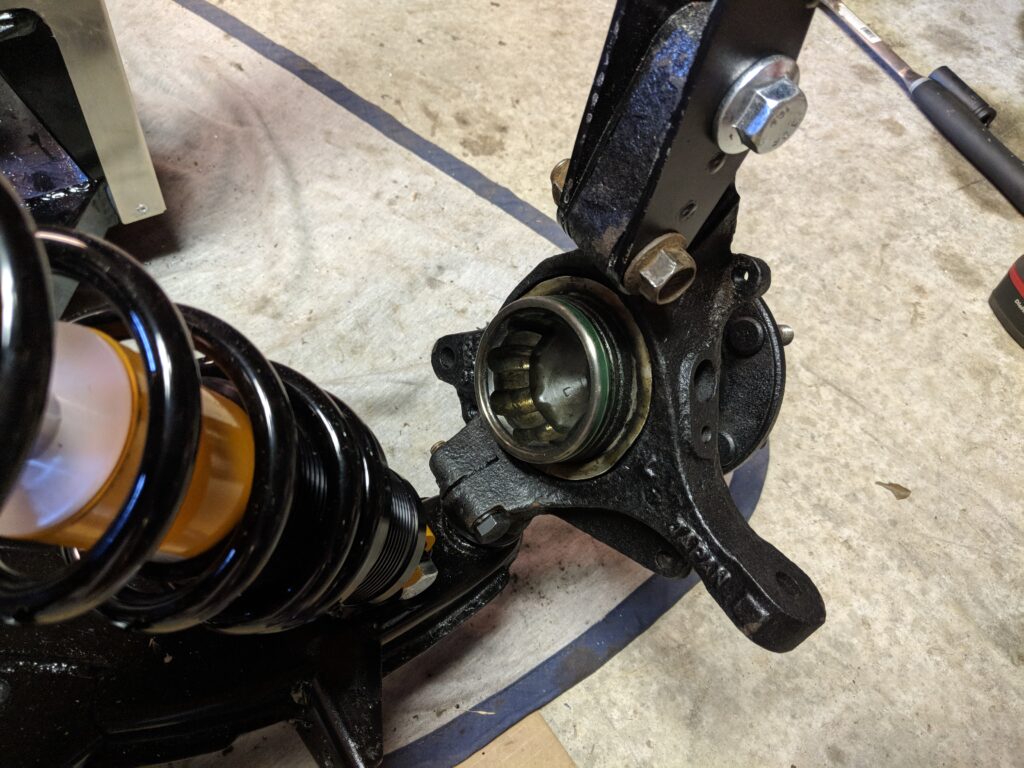 Front suspension: Disassembled front axles and inserted outer axle stubs into the spindles. Used the pipe trick which made this super easy compared to FFR’s vice and hammer method. One whack and it was off for both axles. Tore up the boot to one upper ball joint when I used a pickle fork to remove […] 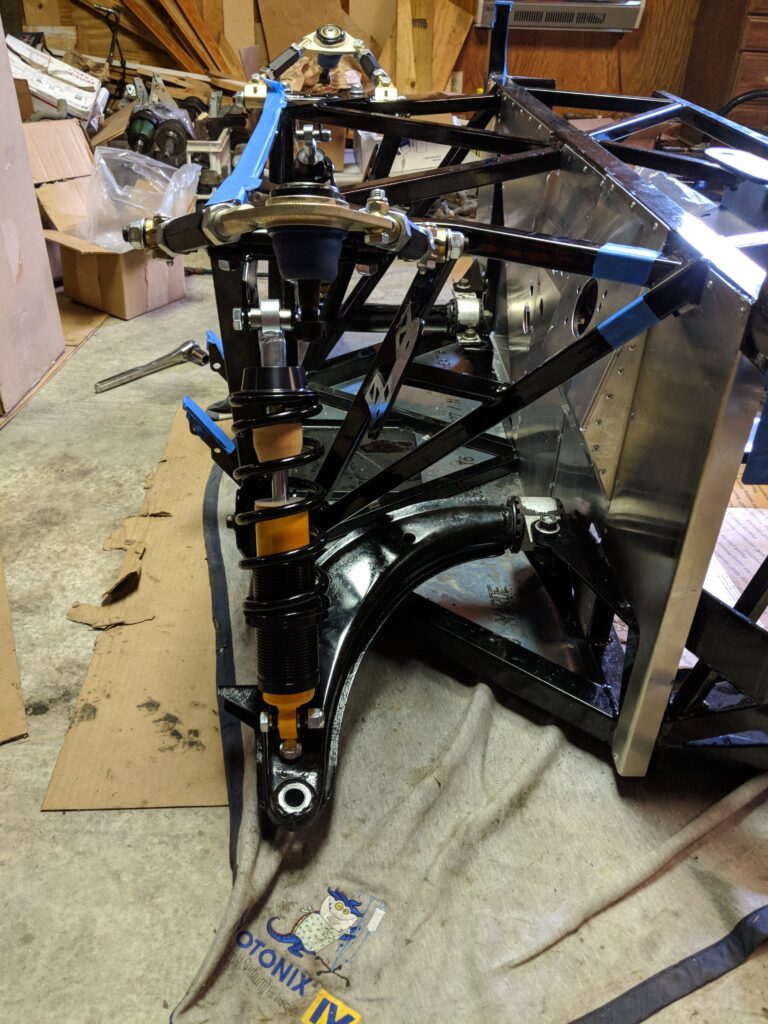 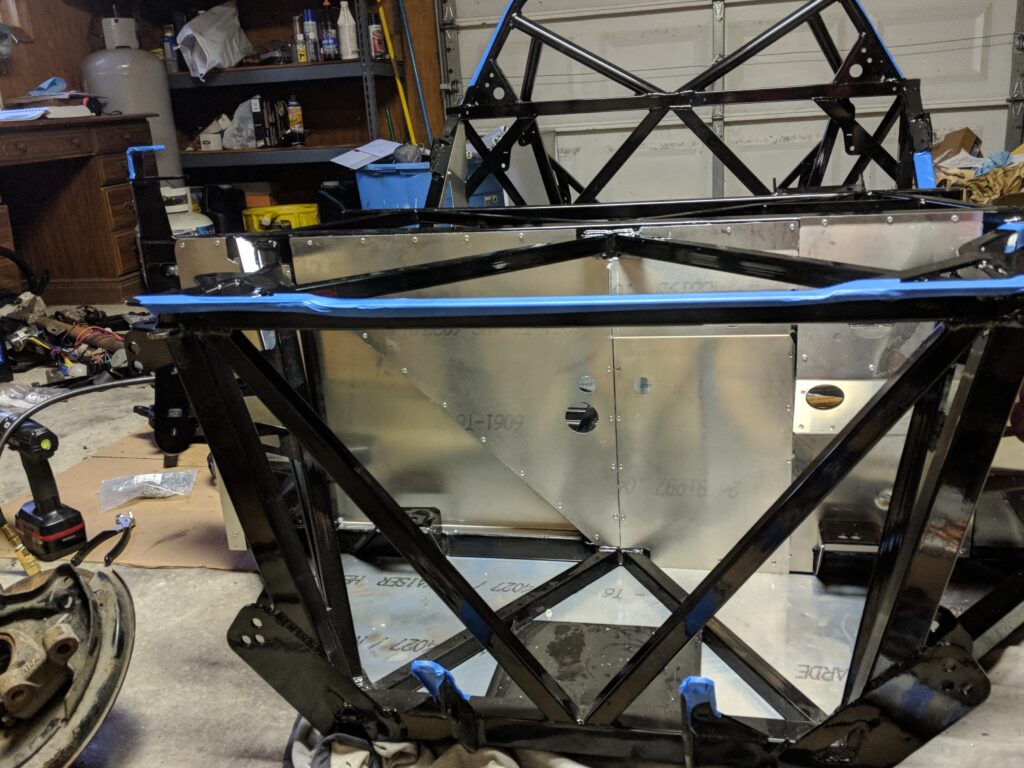 Engine Rebuild Mounted exhaust manifold and turbo. Installed hard coolant lines but waiting on replacement rubber hose connections for them.  Timing system fully installed and covers added. Suspension Parts Prep: I disassembled the rear donor suspension. However, I have to tackle one more long lateral link bolt that has rusted in place as well as […] 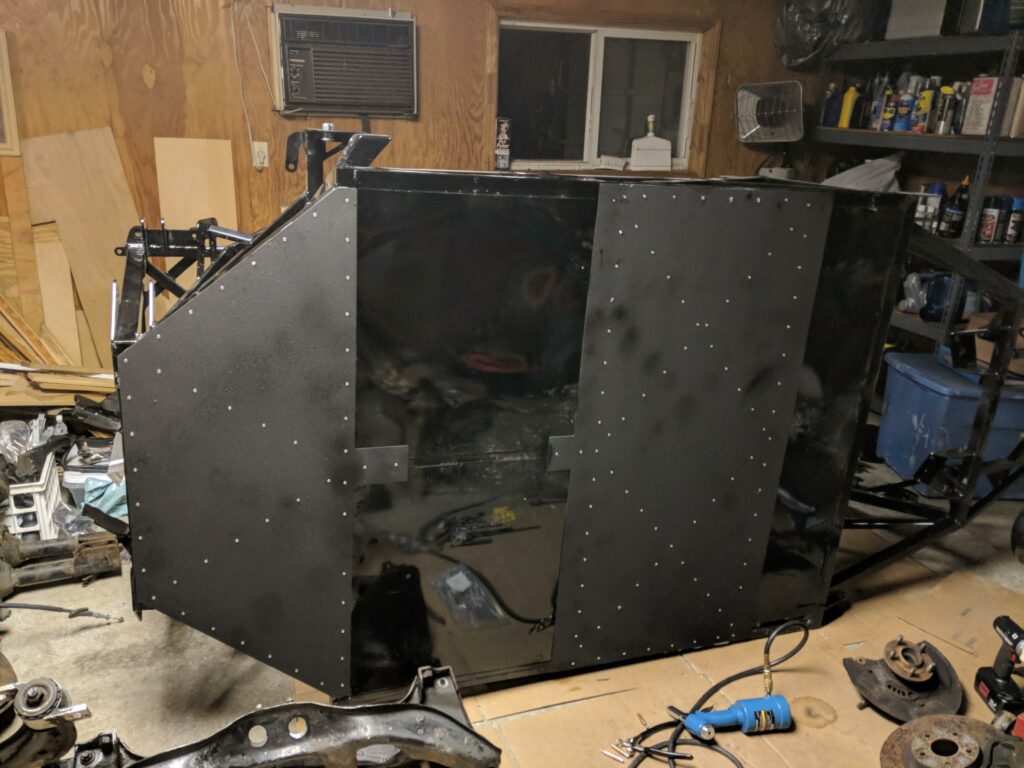 Riveted the underbody panels. Coated with 3M Rubberized Undercoating. It’s hard to get the finish consistent with this paint but it turned out alright and not terribly important for an underbody panel. Donor suspension prep: Derusted the spindles using a chemical rust-reverse product. It turns them a nice black color. The stuff’s fairly expensive though, […]